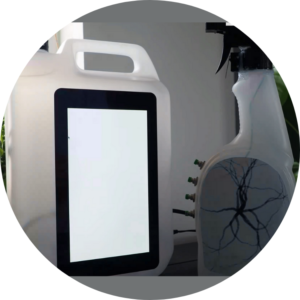 This resource has been created as a means of engaging with Nicholas Bourriaud’s concept  of the Radicant. When thinking about the theme decolonisation and the prompt life in the  decolonies I defaulted to think about non-human decolonisation. My PhD research explores  Jussi Parikka and Garnet Hertz’s concept of Zombie Media, which to paraphrase is media  which refuses to disappear from planetary existence. In heritage typically we have the  reverse problem, ensuring our heritage survives rather than trying to make it disappear. By  pairing ideas around zombie media with decolonisation I started to think about non-human  networks, this led me to explore weeds. A particular weed called mind your own business  caught my eye when looking up weeds, some other not so legal weeds did appear as well.  This somewhat cheeky name for a weed, fits well with decolonisation and privacy, how its  either exploited or ignored.

The audience was initially gardeners determined to rid their gardens of weeds however it is  suited to a much larger audience interested in re-wilding spaces. I have chosen to work with  the open-source software Processing to create the program which generates the roots.  Being open source means it’s possible to access the source code but also means its free  from capitalist drives. Other hardware included is a Raspberry Pi 3B+ which when there isn’t  a global chip shortage is a low-cost credit-card sized computer, this one cost £30 before the  pandemic. The screen is a recycled tablet screen, and the housing is HDPE plastic bottles.  The reason these bottles were chosen is because HDPE plastic can be recycled indefinitely  *when recycled correctly*. The work is built in a way it could be disassembled and recycled  and exist in a new form. Working with these materials has triggered me to think about  decolonisation and technology, how the materials themselves are transplanted from their  organic locations to be reassembled into the devices we have in our pockets. Also, the  displacement of land as we mine for increasingly finite resources to create such devices and  what the human cost is of these processes.

In working with methods adapted from Media archaeology which sees media cultures as  sedimented and layered, a fold of time and materiality where the past might be suddenly  discovered anew, where new technologies grow obsolete increasingly fast (Parikka, 2012)  enables this work to question the materiality and sustainability of virtual heritage. Media  archaeology was coined by Jacques Perriault in 1981 to deal specifically with media  artefacts (Huhtamo and Parikka, 2011). Much of the focus on the discipline has been on the  social world, with little acknowledgement of the environmental effects of mediatization on the  environment. The materialist dimension of digital media needs to be acknowledged in a  world where climate crisis is being accelerated by the detritus of the digital world. Often  media ecologies are conflated with the digital environments they construct rather than the  actual environment which they disrupt. Yet the discussion around the materiality of media is  often hidden, further still how the media is returned to the soil is even harder to determine.  With an estimated 50 million tonnes of electronic waste generated each year (Forti et al. 13)  there is a clear need to be working with fewer and more sustainable materials.

Erik Champion a key frontrunner in the growing discipline of virtual heritage argues we  cannot afford to have our digital heritage disappearing faster than the real heritage it seeks  to preserve (2021). With the advent of digital media, traditional storytelling practices have  been disrupted, distributed, and developed using diverse means of communication saturated  by social media. The storyteller and audience operate in a multimodal space as digital  narratives offer us the opportunity to enact stories rather than to merely witness them  (Murray, 1998). I am interested in the growing area of alt ctrls or alternative controllers.

Typically, these are controllers or custom made devices that add bespoke interactions to an  interactive work such as an indie video game, the controllers don’t necessarily have to be  digital. By developing a custom device disrupts the expected user experience of a screen based experience.

Uncertainty is acknowledged in the code by adding random functions and in that the visual  outcome will be different with every user interaction. This device was made at home, had I  been present at the jam in York the enclosure/structure of the custom controller could have

been very different as I worked with materials that I had to hand. In the interest of  transparency, the code is available below the reference list, this could be copied and pasted  into a processing sketch and run remotely.